Jay & Jay Industries was approached by the Coffs Harbour City Council as part of tendering opportunity between us and 2 other companies. The proposed scope of tendering was for a design and implementation plan as well as a detailed costing schedule including supply, deployment and retrieval for a section of coastal protection works as part of their redevelopment of the Jordan Esplanade boat harbour. Initial earth works had been halted by a number of protection agencies including Fisheries and the EPA due to concerns of sediment migration. Jay and Jay Industries was the successful tendering company.

This scope of works was for a very sensitive project being under taken by council. Significant public scrutiny of the operations was a daily occurrence. The ongoing daily operation of this boat ramp was critical as the Jordan Esplanade ramp is the launching point for emergency services and police boats. Council was also required to maintain normal public access to this busy boat ramp.

As part of Jay & Jay Industries being awarded this scope of works our crew and contractors were individually screened and were informed our works would involve public interaction and would be scrutinised by the user’s of the boat ramp and groups hostile to the works.

This project involved some unique challenges. Time line was critical as all earth works had been halted until silt and sediment control measures were adequately contained the large volume of silt expected to be produced. Navigational aids were also required by the NSW Fisheries as this boat ramp is used day and night by a large number of pleasure and commercial fishing boats. Public access had to be maintained during the complete timeline of our works, limiting the amount of area for our crews to work and lay out the required materials. By far the biggest issue was the large currents and daily water surges generated in this boat harbour. Surges of up to 8 meters were observed by Jay & Jay Industries crews while completing this project.

Class 3 custom manufactured booms were selected for this project as well as carefully planned anchoring measures. During the scope of our works we encounted damage to the installed booms from boat collisons when members of the public drifted into the installed boom. Theft of installed anchoring methods occured during the initial deployment. Vandalism was also seen on the installed protection measures as well as hostility from a small group of locals against the redevelopment. Throughout, Jay & Jay Industries maintained a strong working relationship with the Coffs Harbour City Council, EPA and NSW Fisheries. Jay & Jay Industries were available to mobilize to site over the whole period of works, as and when needed. 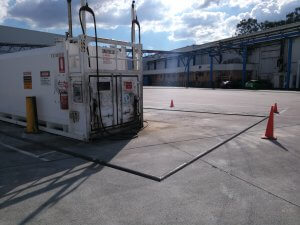 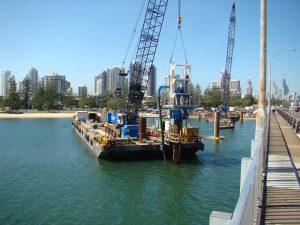 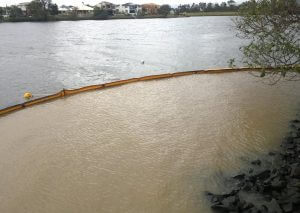 Wondering which product or service you need? Call us and talk to an expert.
Get In Touch